China has begun to upgrade its Beidou Navigation Satellite System with global-coverage capabilities through the launch of new satellites.

Two third-generation Beidou satellites, the first of their type, were lofted atop a Long March 3B carrier rocket from Xichang Satellite Launch Center in Sichuan province on Sunday night and were placed in medium Earth orbit thousands of kilometers above the Earth. They will function for at least 12 years, according to the China Satellite Navigation Office. 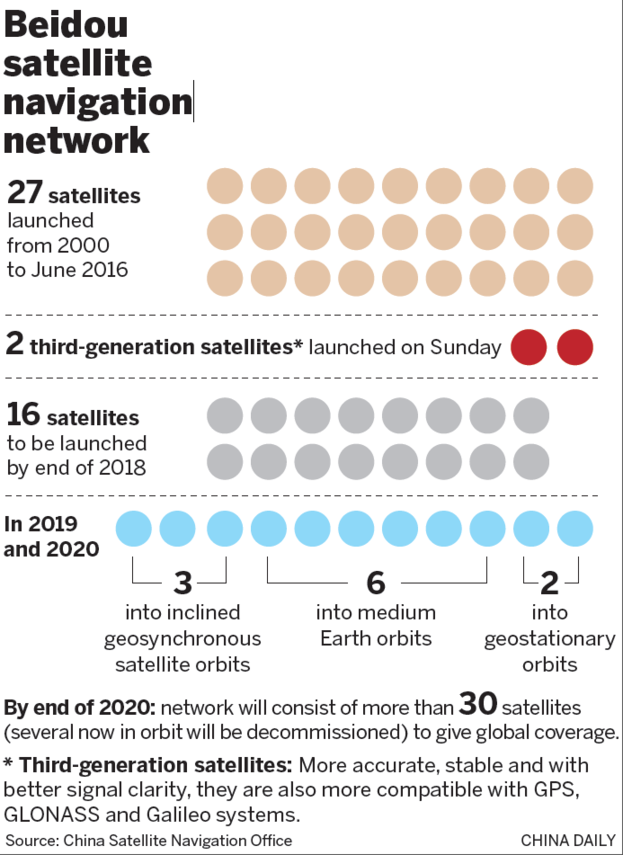 Beidou is the world's fourth navigation satellite system, following GPS in the United States, GLONASS in Russia and Galileo in the European Union.

The new-generation satellites feature better accuracy, stability and signal clarity than previous Beidou models thanks to improvements in intersatellite links, laser communication devices and atomic clocks. They will also be more compatible with GPS, GLONASS and Galileo, the satellite office said in a news release.

Xie Jun, chief engineer of the third-generation Beidou satellites at the China Academy of Space Technology, said each of the newest satellites is able to operate autonomously for at least 60 consecutive days if the ground control encounters malfunctions. This enables the network to reduce dependence on ground stations and to reduce operational costs.

By the end of 2018, China will have launched 18 third-generation Beidou satellites into space to cover all nations involved in the Belt and Road Initiative, including the two launched on Friday, the office said.

The Belt and Road Initiative, proposed by President Xi Jinping in 2013, refers to the Silk Road Economic Belt and the 21st Century Maritime Silk Road. It is estimated to benefit about 4.4 billion people in 65 nations, according to the government.

The Beidou system now covers nearly 30 countries involved in the initiative including Pakistan, Egypt and Indonesia, the office noted.

In 2019 and 2020, China will send six third-generation Beidou satellites into medium Earth orbits, as well as three to inclined geosynchronous satellite orbits and two to geostationary orbits. Both are synchronized with the rotation of the Earth, but geostationary satellites are parked over the equator, according to gisgeography.com.

According to plans from the China Satellite Navigation Office, the network will be made up of more than 30 satellites before the end of 2020 - several now in orbit will be decommissioned by then - to give Beidou global coverage.

Twenty-seven satellites have been launched for the Beidou network, the first in 2000 and the most recent, before Sunday's launch, in June of last year. The system began providing positioning, navigation, timing and message services to civilian users in China and parts of the Asia-Pacific region in December 2012.

Beidou has acquired a great number of users in China. Most of the shared bicycles in Chinese cities now employ Beidou-based positioning services; more than 4 million taxis, long-distance buses and cargo trucks nationwide have been equipped with Beidou devices; and about 40 percent of smartphones in the Chinese market are able to access the services, according to Ran Chengqi, director of the China Satellite Navigation Office.